Unless you’ve been living under a rock, you’ve likely noticed the 6.5’s have taken the shooting world by storm in recent years. Touting long, heavy for caliber, high ballistic-coefficient (BC) bullets, long-range competitors and hunters alike have reaped the benefits of the various cartridges designed around this caliber. Most recently the 6.5 Creedmoor, developed over a decade ago, has become one of the top-selling cartridges in North America. The 6.5×55 “Swede” has long been heralded by European hunters for its mild recoil, and the 6.5×284 Norma has reigned supreme in the world of long range mountain hunting and precision competition. I’ve witnessed first hand the slender 6.5’s capabilities on a clients stone sheep hunt in the Yukon a few years back. With a handsome ten-year-old ram bedded on a cliff-strewn knife ridge, and the wind blowing clouds of dirt off the ridge some 500 yards away, the client meticulously threaded a 140gr Berger VLD into the boiler — wind be damned — dropping the ram on the spot. You might be wondering, “if the 6.5×284 is so damned good, why do we need another 6.5?” Well, when it comes to extended range mountain hunting, the compact 6.5 PRC offers distinct advantages over its x284 cousin. The 6.5-284 started life as a necked down wildcat of the 284 Winchester in the late 1960’s; its short-wide case dimensions proved tantalizing for competitors looking to push higher ballistic-coefficient 6.5mm bullets. While Norma adopted the cartridge in 1999, some variation in chamber dimensions remains today, creating complications for mass production of brass, ammunition, as well as commercially chambered rifles. Though the x284 has bathed in the limelight of long-range precision shooters and mountain hunters, the variation in throat length, base, and chamber dimensions handicapped its abilities to be sold outside of the semi-custom and custom markets and kept it primarily as a reloaders round. In addition to these variations, the x284 isn’t a true short action cartridge. As such, it requires high BC bullets such as the Berger VLD and Hornady ELD-X to be seated deep into the case to fit in short action chambers and magazines. Seating the projectile this far off the lands can result in a loss of accuracy, and potentially a loss of velocity if the chamber is built to short action dimensions. Alternatively, placing the 6.5×284 in a long action negates the inherent benefits of a short, fat, cartridge.

Contrary to what skeptics may think, Hornady’s new 6.5 PRC was bred out of necessity as a commercially available answer to the 6.5-284. While in its commercial infancy, the bloodline of the 6.5 PRC dates back to early 2012 when the Precision Rifle Series was formed and published its rule book, stating that cartridges must be 30-caliber or under, with a maximum velocity of 3200 fps. At that time George Gardner of GA Precision was exploring a high BC 6.5mm magnum to fit this series and Aaron Davidson of Gunwerks was doing the same. Both found that Hornady was incapable of fulfilling the brass needs, but went their separate ways on cartridge development. In May of 2012 Gunwerks had a reamer printed for a 6.5 Short Long Range Magnum, based off their proprietary 7LRM chambering. While the 7LRM was capable of pushing a 180gr bullet to 3100fps, their in-house brass was harder than Hornady’s production brass, resulting in velocity loss in the latter. This caused Gunwerks to tweak the 7LRM, effectively creating the multiple chamber dimension issues stifling the 6.5×284’s ability to be mass produced. During the same period, GA Precision was pushing their 6.5 GAP 4s — also known as the 6.5 SAUM. The 6.5 GAP 4s is a venerable cartridge, but due to the curse of brass availability in its early life, it will remain a handloaders round. Coupled with the fact that it’s optimized for magazine fed rifles popular in long range competition, the GAP 4s was never a true contender for the hunting market. This brings us to the 6.5 PRC. If Hornady’s 6.5 Creedmoor was their answer to the call for a non-magnum low-recoil, all-around, short action precision cartridge, the PRC is its magnum big brother. Designed specifically for 140-150 gr bullets and optimized to fit in top-loading (the majority of hunting rifles) short action rifle platforms, the 6.5 PRC replicates the 6.5×284 while burning less powder. Hornady chose the 300 RCM as the parent case for this new cartridge, after vetoing the WSM’s due to their shorter throat length and larger-than-necessary case capacity, leading to throat erosion and shortened barrel life. The PRC casing also features a non-rebated rim, which aids in its ability to function well in standard hunting magazines.

Much like the 6.5 Creedmoor, Hornady is touting the 6.5 PRC as a long-range precision round that blurs the lines between competition and hunting. Its ability to push incredibly high BC bullets to 3000fps in a compact package — while delivering tolerable levels of recoil — is appealing, the commercial viability and low cost of ammunition truly makes this platform a sweetheart. Hornady currently lists two loadings — the 147gr ELD Match and the 143gr ELD-X Precision Hunter — both under forty dollars a box. For contrast, the majority of commercially loaded 6.5×284 ammunition list closer to sixty dollars per box. Undoubtedly, ammunition cost is not a consideration to those who roll their own, but for the majority of hunters, it will be the biggest selling point of this round. Ammunition and rifle manufacturers are in the business of selling, and there is no question that certain attempts at new cartridges over the years have been nothing short of a re-branding of bygone chamberings; marketing strategies to answer a question that was never asked. Often a cartridge family sees great success in one chambering but falls short in others. The 300 WSM, for example, has gained widespread popularity while the 7WSM has essentially become obsolete. As outlined above, there have been a variety of potent 6.5 cartridges over the years with the 264 Win Mag dating as far back as 1958, and the 6.5 Rem Mag in 1966. Though these cartridges are capable of delivering velocities similar to the 6.5 PRC, they were never commercially built with modern high BC bullets in mind, and are not barreled with an appropriate rate-of-twist to stabilize them.

Simply put, the 6.5 PRC currently boasts the best all-around performance of any commercial cartridge in the .264 class. On paper it appears to have it all; optimized for high BC bullets, flat trajectory, tolerable recoil, and affordable ammunition. With all that said, it is then a question of how it well it performs in the flesh. My first experience with the 6.5 PRC was at the Leupold Optics Academy (L.O.A) range in Madras, Oregon this past January. The folks at Leupold graciously hosted the JOMH team for a personalized precision crash course, prior to a mountain goat hunt we did in February, and it was certainly worth the trip across the border. In this case, the 6.5 PRC I was shooting was housed in a Gunwerks Clymr platform, borrowed from our Editor-in-Chief Adam Janke. The rifle had a newly designed ultralight carbon-fiber Clymr stock, titanium GLR action, a twenty-inch Proof Research carbon barrel, and a directional muzzle break. This appeared to be the perfect application for the mild recoiling 6.5mm. Topped with Leupold’s new Mark 5 HD 3.6-18 power scope and weighing in at just over eight pounds with a bipod, this package is a mountain hunters dream.

With hot-rodded 140gr VLD loads from Gunwerks, we chronographed our ten shot group average at 3009 fps — yes, with a twenty-inch barrel — before collecting data out to 1000 meters. After working on my form and checking zero at 100 meters, we went straight for the 1000 meter steel, where the 6.5 PRC really shines. While the L.O.A Range is calibrated in Meters, I have run the ballistics in Yards as the standard system is most prevalent amongst our readers. 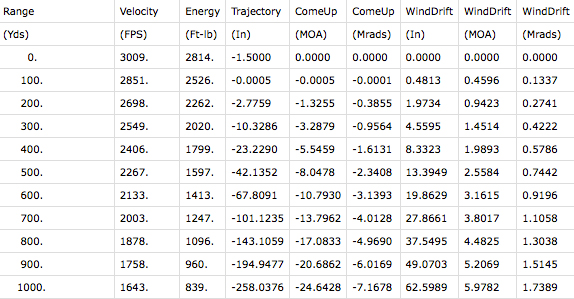 While most hunters and many shooters may never stretch the legs on their rifle to see its maximum potential reached, they will still reap the benefits of reduced wind deflection, drop, and most importantly recoil. Certainly felt recoil will be greater for a 100lb child than a 200lb adult and many people — primarily men — claim not to be affected by recoil, but recoil isn’t subjective. The less a rifle recoils the easier it is to shoot, which means you will spend more time behind the trigger, and become more proficient with the rifle. The ability to spot impacts — and misses — is also invaluable to precision. There is a reason that the majority of long-range competitors either use smaller calibers or heavy rifles. Having fired around 200 rounds of 6.5 PRC in two days at the L.O.A, I can attest to this. Were I to have shot the same amount out of my seven pound brakeless 300wsm, my accuracy would certainly have degraded, instead, it improved. Sadly, by the time this is published I will have returned the 6.5 PRC to our Editor-In-Chief, but this chambering will certainly be on my short list when I go to purchase a new hunting rifle.

If you’ve read through this, and are left wondering how the 6.5PRC fared in the mountains… Well, you’ll just have to watch Toeing The Line to find out…